In early 2013, we published a blog sharing what we felt were the worst times and days for press releases. That blog post is to this day (over two years later) one of the most highly trafficked page on SHIFT’s website. Why? The topic of press releases and when or when not to put one out over the wire is one that is all too popular in PR.

Two years ago, we found that Monday and Tuesday and early hours (7 to 9 a.m. ET) were the most popular to put out a release. Our advice? Try publishing a release later in the day and week so your news wasn’t simply one of many.

This year, we took our research a step further. First, we analyzed the distribution patterns of over 100,000 press releases published via Marketwired, PRWeb and PR Newswire in 2015. Next, we determined how many times each release was shared across nine social media platforms, including the big three – Facebook, Twitter and LinkedIn.

In 2015, Tuesday was the most popular day to publish a release, followed closely by Wednesday.

In terms of timing, 9 a.m. ET held the top spot, with another large spike around 8 p.m. ET.

Here’s where it gets interesting: the average press release in 2015 was only shared 18 times. Below, you can see how that stacks up. The gray boxes represent the average releases, with any falling in the white boxes representing outliers. 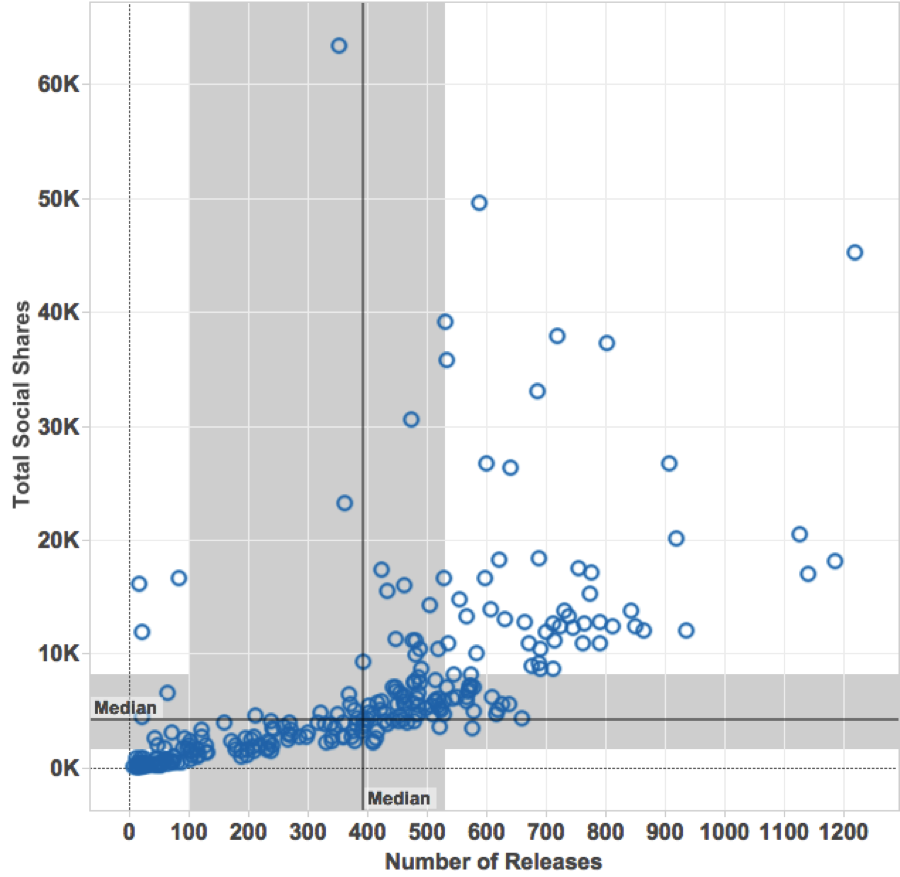 The power law chart above shows just how large the disparity is between the top 10 releases and the rest of the population. These releases did something right – they had news to share that was interesting enough to elicit a response from the brand’s audience.

It’s 2015 (gasp, almost 2016), and we’ve learned a thing or two in the past two years. It is no longer about getting above the noise; it’s about creating engaging content that your audience actually cares about enough to do something about it.

What made those releases in the white outliers? How can you get your news to stand out amongst the competition? Keep an eye out for my next post, which dives into how your brand can achieve outlier status with its news.

Disclosure: The press release sampled data comes from the Marketwired, PRWeb and PR Newswire domains and was collected for the period 1/1/15 to 9/30/15. No filtering was performed on the URLs, and thus it includes all press releases from all categories. Data was collected using Sysomos and is set to the Eastern Time Zone (UTC -5).