In the original schematic that Mark Schaefer posited about the content shock (read this and this for background), the shock was, in essence, reaching the limits of how much content consumers can consume vs. how much marketers can create. 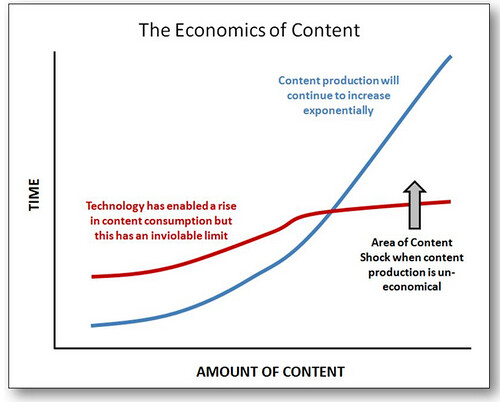 One of the many comments on the articles Mark and I wrote was that while in aggregate, the shock seems almost a certain reality, there must be something to content marketing, else why would we recommend using PR and earned media for it?

“Schaefer’s piece talks how content marketing cannot be sustained for many businesses due to cost. Yet you talk about PR professionals helping clients improve the quality of owned content. (I fully agree, just seems a little bit in conflict).”

Here’s the nuance in the content shock: we haven’t discussed attention and quality. In the content shock, attention is a zero sum game. That’s the core of the idea overall – that we have reached saturation and if we give our attention to one thing, something else must suffer. That’s true, and it always has been. The difference between eras past and now is largely a question of choice. There is a new media mix: 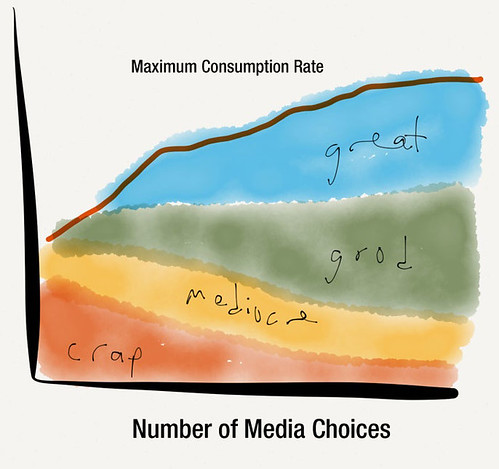 In the old, old days, we had 3 TV stations, a couple of local newspapers, and a few radio stations. Our media landscape was severely limited, and thus content of any quality got consumed. As the number of media choices expanded, the limits on what we watched and heard broke down. Cable TV offered more channels, some of which were very much to our liking. Rather than a media universe of only stuff we didn’t like and stuff we tolerated, we had stuff that was actually good. The Internet came along and exploded the number of channels we had access to. Suddenly, we could find not only good content, but great content, content that seemed like it was tailor-made just for us.

As a result, things started to fall by the wayside. We stopped watching TV shows we didn’t like and started choosing from Hulu, Roku, Chromecast, and Netflix instead. We stopped listening to the radio filled with other people’s choices and started choosing from Spotify, Pandora, and iTunes instead. Not only did our media consumption habits increase, but so did our selectivity.

This is the nuance of the content shock: we have practical limits on what we can give our attention to, and our universe of content is actually great. The amount of content we need to consume on a daily basis that we don’t like has diminished significantly as choice has expanded, which means that for any company looking to invade that individual media mix, they MUST be as great or greater than what’s already in there. There is less bad or mediocre content left to squeeze out of a zero sum attention budget.

The only way you can do so is to create spectacular, top-notch content, and that’s where it becomes un-economical for many brands. The exception is this: if you provide something that your audience deeply wants that they can’t get elsewhere. Kevin Kelly’s prophecy of a thousand true fans is being fulfilled. We will have our loyal audiences, to whom everything we produce for them fits in the great content category. We will have some content audiences to whom a fair amount of what we produce is good enough for them. We will lack the audiences to whom we have no appeal – and as long as our businesses do not rely on them, we’ll be okay.

The worst possible strategy is to go broad and general to attempt to appeal to everyone. There is no everyone any longer in the content shock, only the people who want to be fans of you. Serve them first, or lose the content game entirely.