Imagine this: You get a $2000 bonus from your employer for excellent work. The same day, your car’s transmission bites the dust and you have to shell out $2000 to get it repaired.

Which event sticks out in your mind a month later? If you’re like most humans, you’re agonizing over that $2000 repair bill long after you’ve forgotten the good feeling brought on by the bonus. 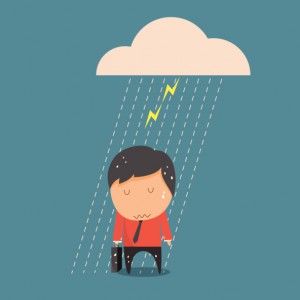 Research on the subject concludes not only that “bad is stronger than good” with very few exceptions, but that negativity easily overpowers positivity of seemingly equal value. Negativity bias has even been demonstrated in three-month olds.

As marketers and PR pros, we strive to create a brand message that’s “sticky.” We also want that message to be positive. Yet therein lies the challenge: if humans are naturally wired to remember the negative, what’s a marketer to do to craft a message that’s both memorable but positive?

Of course, every brand has the option to latch on to a negative emotion and build their brand on that. But as Scott Monty pointed out, it’s generally not a smart (or sustainable) strategy to couch your brand identity in negativity.

Why not instead approach negativity as an opportunity to showcase positivity?

To reference Scott once more: think about how you actively provide value (positive association), rather than how you differ from a competitor (negative association). Your audience, being human, is more than capable of drawing those negative comparisons without your help – and you end up with the stickiness of negativity without tethering yourself to the negative trait itself. 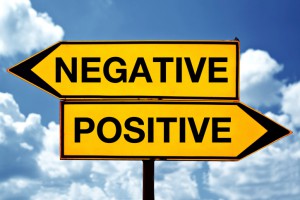 Ekaterina Walters’ observation at this year’s FutureM conference rings true: it is far easier to convert haters into lovers than it is to turn an indifferent audience into fans.

Like or hate the term, real-time marketing represents a killer opportunity to jump on episodes of negativity and bring about positive outcomes. By providing a timely solution to an individual issue or offering clever commentary on a current event, brands can effectively win over negatively engaged audiences. Take KitKat’s recent #bendgate Twitter win, or any number of these examples of RTM done right.

Keep in mind the “magic ratio.” 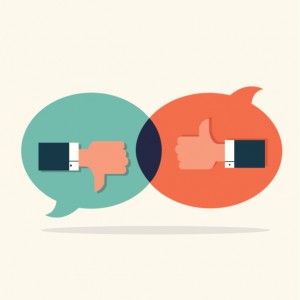 Okay, there isn’t just one magic positive-to-negative ratio. Depending on which study you reference, you need anywhere from 3-6 (Fredickson and Losada) to as high as 20 (Grossman) positives for every one negative in order to balance the equation. The point is, since negatives weigh heavier than positives in the human brain, there must be a higher frequency of positive episodes in order to obtain overall positivity.

For marketers and PR pros, this means landing more frequent favorable (or at least neutral) media mentions and inspiring more happy tweets than angry ones. Maximize positive coverage and let the flood of positive sentiment dissolve the impact of negativity in your audience’s mind.

Remember that as humans, consumers will latch onto negativity far sooner than they’ll independently notice something positive. Your ability to resonate with your audience is enhanced by the finesse with which you can identify negative sentiment and gracefully associate it with a positive message.

What is YOUR brand doing to lasso negativity and channel it into a positive brand image?