One of the most common PR measurement questions we receive is, “What is the value of an impression?”

The short answer: nothing. Impressions are worth nothing by themselves. The long answer has a fair bit of nuance to it.

Why do we measure impressions?

Impressions are a diagnostic metric; if your earned media placement or advertisement isn’t seen by anyone, then we know its impact to your business is also zero.

Secondly, impressions are the precursor to their outcomes. Ideally, an impression leads to a change in awareness or perception—if it’s impactful.

An unimpactful impression is one in which there was no change to awareness or perception. For example, I drive past billboards and advertisements every morning on my commute to work. I can’t recall a single brand or product on any recent drive. The billboard owner would count my exposure as an impression, when selling that space to advertisers, even if it doesn’t changed my awareness or perception.

Contrast that impression with the impression you’ll receive after watching this hilarious short ad (not a client, no relationship, mildly NSFW for the most conservative workplaces):

You only need to watch that once, and you will likely agree that your awareness and perception has changed significantly. Set a reminder on your smartphone for a week from now and see if you can NOT remember this video after only one viewing.

Determine the value of an earned media impression

Here’s a simple way to do so: measure how often people search for you by name. The example brand and product above, Squatty Potty, is more than 7 years old. Yet when you look in Google Trends, we see that the brand achieved some prominence early in 2015 for an appearance on Shark Tank, but didn’t really hit its stride until October 2015 when its rather colorful ad came out: 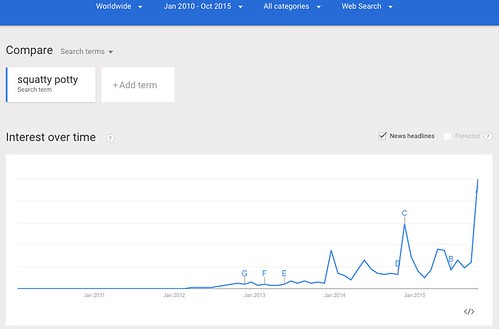 Above, we see the value of the impressions from this particular ad dwarfed everything else they’ve tried to do to build awareness and perception in the last 7+ years. We see a direct impact on search volume from this particular piece of media. If search volume then leads to website traffic, you can measure the value of that website traffic using goals and goal values in Google Analytics (or the web analytics software of your choice), and ultimately reverse engineer the value of the impressions and the awareness or perception they created.

Measure perception through a survey

How else could you measure awareness and perception? Create a brand lift survey, which gauges respondents’ intent to purchase your products or services, and then measure before and after your earned media initiatives: 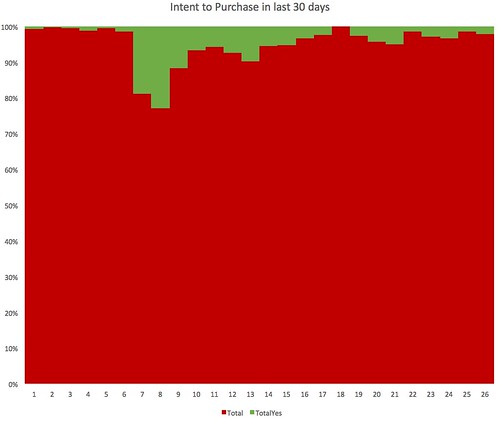 Above, we see that my audience’s intent to purchase changed dramatically when I released a new product and announced it with an influencer campaign (represented by the green bars that indicate intent to purchase from an on-site survey). I can then correlate purchase intent with actual sales to determine how impactful my campaigns have been.

What have we learned? Since all impressions are not created equal, we can’t assign a universal value to the impression.

Instead, measure what impressions create, awareness and perception, and then assign values to these outcomes using your marketing analytics software.