As 2017 enters its final month, we hit a period in the US B2B world known as the great lull. Companies slow down in America between Thanksgiving and New Year’s Day. Out of office auto-replies fly through the digital ether like flocks of birds migrating for the winter. People’s thoughts turn towards friends, family, and home. Only sales professionals aiming to hit quota and publicly-traded companies seeking a strong quarter close go full throttle until December 31.

Given this backdrop, when would a jobseeker in the public relations industry be best served to look for work?

Come January, once the business world awakens from its holiday hibernation, jobseekers madly scramble to be noticed. Using our predictive analytics tools, we forecast that the time when jobseekers in the PR industry will be most active in all of 2018 will be the week of January 14, 2018: 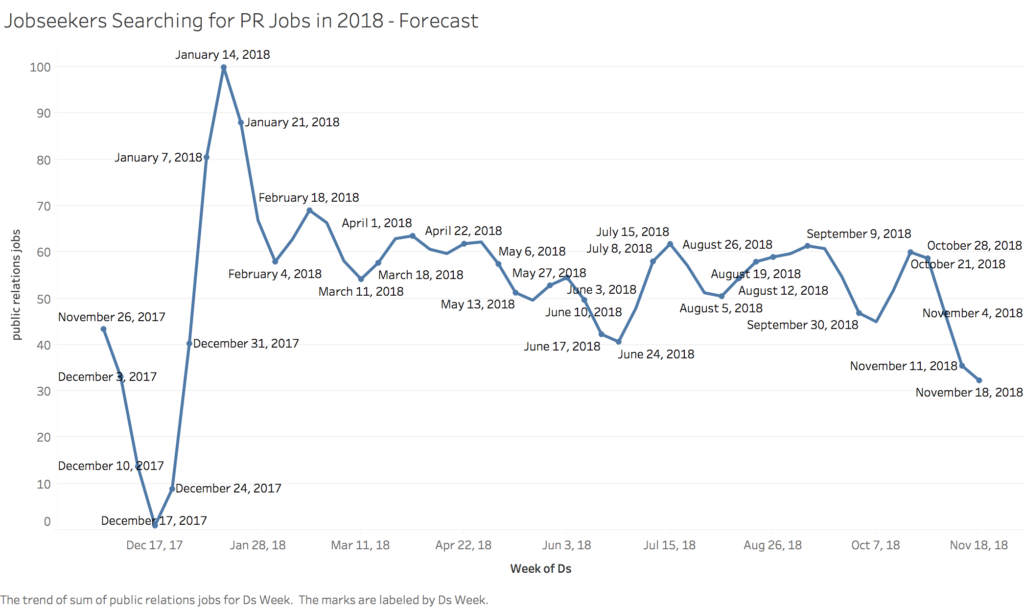 Above, the forecast for the search term “public relations jobs”

The worst time to look for work is when everyone else is looking for work. Jobseekers searching for PR jobs will swamp prospective employers just a couple of weeks into the new year.

Thus, the smartest, savviest candidates will be working just as hard as sales professionals, calling during the quiet days of December, reaching out to personal networks, and finding ways to arrange in-person meetings.

When To Find a Public Relations Job

The best weeks to reach out? Between Thanksgiving and December 10, 2017. This is when people looking for PR jobs are at their relative lowest and while people are still in the office. Wait another week and the search volume for people who want to turn on their out of office notice skyrockets: 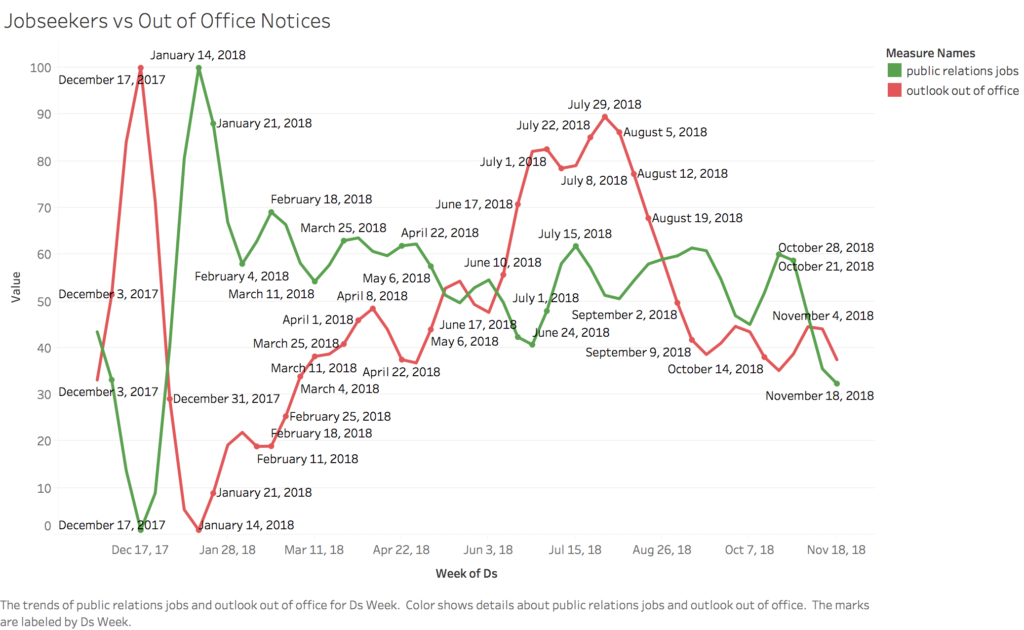 At this point – the week of December 17 – it’s too late to be noticed. Your job application, your outreach, your pitch will be buried in the inboxes of people who won’t dig out until after the new year. The chances of your email simply being archived/deleted are high as no one wants to carefully read hundreds or thousands of post-holiday email.

Just as savvy shoppers know the best times for deals, so too do you now know when the best – and worst – time to apply for PR jobs is. Go all out until December 10 to be noticed, to be seen, to be heard.

Also, I’d be remiss to not mention that SHIFT is hiring at all levels, in most of our locations. Take advantage of the relative quiet to apply now and be seen, versus getting lost in the crowd in January.