Last week, I had the pleasure of attending the San Francisco launch of Super Pumped, written by New York Times reporter Mike Isaac and hosted by The Verge’s Casey Newton. As an avid fan of Silicon Valley tech stories, the Booksmith, a bookstore in the historical Haight neighborhood that held the event, was the place to be. I’d been following Isaac’s work since he first started reporting on the company years ago. My interest was piqued when I discovered we’d be getting a deep dive of information private for so long, but now made public and showcased in way that only Isaac’s intelligent and well-written storytelling could give it justice.

While I have a good understanding of Uber (it’s installed on my phone and probably yours) and the company and people behind the ride sharing app, if there’s someone who knows intimate details, it’s Isaac. Isaac kicked off the event by reading a passage from his book that detailed Uber’s early beginnings. Following this in-depth look, which included a time when Uber operated with impunity in Portland, Newton and Isaac chatted about the book and the musings that come with being reporters focused on what I love: tech.

The audience, myself included, enjoyed the perspectives of Newton and Isaac as the topics ranged from Uber’s dark days (“Guys, this book makes me MAD,” said Newton. “On page 195, Mike writes that Uber employees choked and forced another employee to do cocaine!”) to the goings-on at other Silicon Valley companies including fellow ride-hailing company Lyft (“If it wasn’t for Uber’s terrible 2017, we may not have had Lyft today in 2019”). 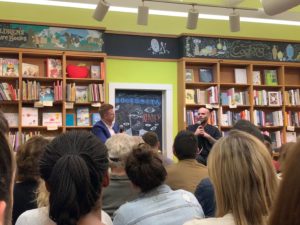 Besides having my copy of the Super Pumped book personally autographed (“Vito, always stay hustlin’”), my favorite moment of the night came when Isaac reminded us of 2017’s travel ban, the Trump administration’s first attempt at banning refugees from entering the United States. During this time, many were traveling to airports in major cities, San Francisco included, to help and support refugees at a tumultuous time. With just one tweet, meant to paint Uber as a hero – “we’re deactivating surge prices for those traveling to and from airports” – the #DeleteUber hashtag was born. While many at the time took the tweet to mean that there was a time Uber was charging surge prices for people going to airports to support their fellow man, we now know the company was meaning to support the cause and activists. While this particular moment is far from “great,” it was interesting to hear that Sarah Fowler’s blog was one of the main reasons why Isaac ended up writing about the rise and eventual downfall of Travis Kalanick.

While I personally haven’t read past the introduction of Super Pumped, I’m interested to see what’s next for Isaac. The possibilities are endless for the next book from Isaac. When pressed by a fellow audience member, the New York Times reporter snickered, “WeWork seems to be have a grand time with its IPO valuation getting cut in half in a day.” Newton quickly interjected, “We’ll see you back here for your book on WeWork, then!”