What is Crisis Communications?

Crisis communications in the public relations world can have many different interpretations depending on who you ask, but here’s the fundamental definition: you’re trying to mitigate damage to your company’s reputation by third party sources. It’s the reverse of traditional public relations, where you’re trying to acquire the attention and approval of third parties, earning media through your good works, your brand, your insights. Crisis communications turns that on its head by dealing with negative earned media.

In many ways, it’s analogous to putting out a fire (though nowhere near as dangerous as what actual firefighters do, and for that we salute them). A fire requires three things to burn – heat (energy), fuel, and oxygen or a catalyst like oxygen (speed). Take away any one of those elements and the fire goes out. Firefighters most often deny fire its heat through the use of water, taking away its energy. For smaller fires, we can choke its ability to burn quickly with carbon dioxide (in many fire extinguishers) or cut off fire’s access to fuel (dry powder fire extinguishers).

In a crisis communications situation, something has gone wrong and your brand is on fire. There’s the something you did or something you’re responsible for – the fuel. There’s the tide of public opinion – the heat, the energy. There’s your speed of reaction to it – the catalyst. As with real fires, if you deny the fire any one of these sources, you break the chain reaction that causes fire and it burns itself out. 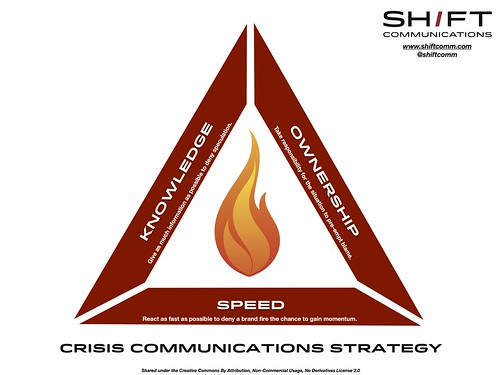 The three ways to fight these brand fires are similar to the ways we put out their real world fire counterparts:

The crisis communications equivalent of denying fuel for the fire. By providing correct knowledge and information, you take away the rumor mill and word of mouth. Very often in a crisis, people fill in gaps of knowledge with their own suspicions. Take away that speculation with facts, and there’s less for their minds to imagine.

The crisis communications equivalent of denying oxygen for the fire. The faster you react and respond, the quicker you deny a crisis the chance to ramp up and get out of control. Speed is critical in most crises and what could be an explosive backdraft if allowed to build up can instead be controlled to a slow, manageable burn by being ahead of the news cycle and turning a juicy story into “old news”.

The crisis communications equivalent of denying heat for the fire. Taking responsibility or ownership of a situation, being out in front of the crowds, and being forthcoming about either what you did or what you’re going to do to prevent the problem from happening again. This pre-empts the blame cycle where others can pile on to assign blame – by being in front of it and owning it, the most they can do is agree with you.

Finally, as with real world fires, the more effective you are in implementing these crisis communications methods, the smaller the fire will grow and the faster you can put it out. Deny a fire just one of the three factors and it will go out, but it may take a while and still do damage. Deny a fire all three factors and it will vanish nearly instantly. In your crisis communications, be in front with acceptance of responsibility and delivery of knowledge with stunning alacrity, and you may intercept the fire while it’s still just a few sparks.

You are welcome to download and print out the crisis communications chart above and freely distribute it, unaltered, wherever you choose, under the Creative Commons By Attribution, Non-Commercial Usage, No Derivatives 2.0 US License.