The worst times and days for press releases

Using four weeks of publication data from MarketWired, we looked at what days and times the wire services are getting swamped with press releases. First up to bat? The day of the week. 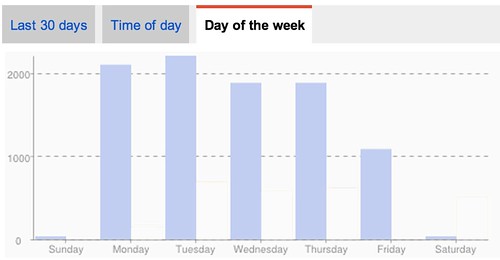 Mondays are popular, but Tuesdays even more so. MarketWire registers the most number of press releases on Tuesdays. Fridays are the least busy day during the work week, and almost nothing comes over the wire on the weekends. 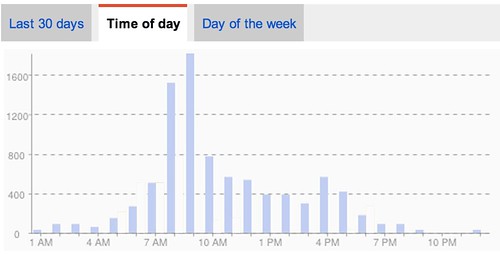 Note: all times are Eastern.

The 8 to 9 AM ET times are when MarketWire is deluged with new press releases. On the surface, this makes sense – after all, companies want to get in front of the news cycle for the day, so they publish in the mornings. The problem is, everyone publishes in the mornings, and thus if you’re a media publisher looking for something interesting, you have a needle in a haystack challenge from so much noise.

What do you do next? If you’re doing a media release, you have a couple of options. First, you can test counter-cyclicality. In the mobile age, there’s no such thing as work-life balance (if we’re to be totally honest about it), and thus sending a media release on a weekend or at a very off-hour might get more notice. Test it to see if that works for you.

Second, you can extend the life of a media release into other parts of the day and week by using the SHIFT Earned Media Hub model. If it’s truly a significant piece of news, share it with your social networks, publish it on your website, turn it into a social media release, buy some paid ads to promote it, blog about it, add it to your content distribution strategy, ask others to blog about it, and do everything you can to get more sustained, longer-term attention to it than just a “fire and forget” press release.

Finally, apply common sense. One of the absolute worst days for a press release in any given year? April Fool’s Day. Even if your announcement is completely sincere, publishing or launching anything on April 1 is guaranteed not to be perceived as credible.

Disclosure: The press release sampled data comes from the MarketWired feed and was collected for the period 1/14/13 to 2/12/13. No filtering was performed on the feed, and thus it includes all press releases from all categories. No press releases were included from other wire services. Data was collected using the Google Reader software and is set to the Eastern Time Zone (UTC -5). Graphics from Google Reader were edited in Photoshop to remove Items Read category as it’s not relevant to when the items were published, but no other manipulations were performed.

The river of pitches
Do social media tempests in teapots matter?