We’ve often said that Facebook is the largest nation on the planet. Nowadays, Facebook is its own planet, for all intents and purposes. 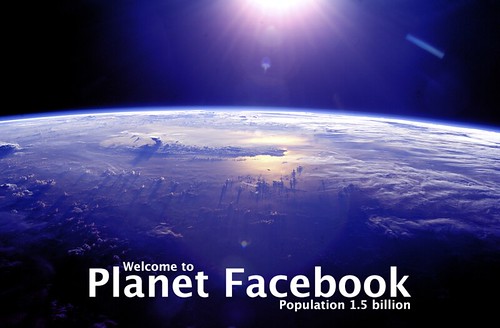 Let’s dig into their results some more.

As mentioned above: 1.55 billion people use Facebook monthly, and Facebook growth has leveled to about 3.5% quarter over quarter: 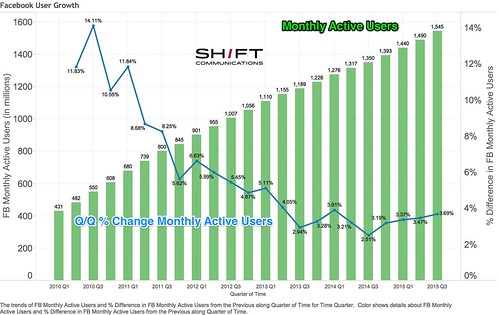 Facebook is at a point now where, in order to grow its user base, it’s having to provide Internet access to new users as part of Internet.org, adding 15 million citizens of Planet Earth to the Internet.

Of that, almost 90% – 9 out of 10 people – use Facebook at least partly on a mobile device each month, as shown by the orange bars below: 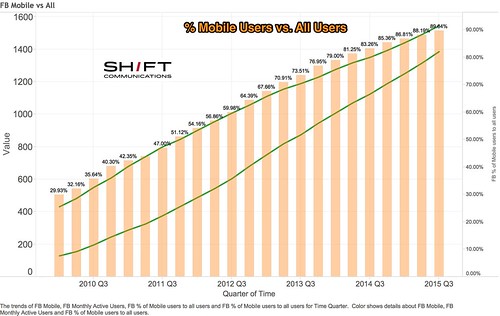 In the conference call, COO Sheryl Sandberg remarked that 1 out of every 5 minutes spent on smartphones in the US was spent on Facebook and 25% of all media time in the United States was spent on mobile devices. 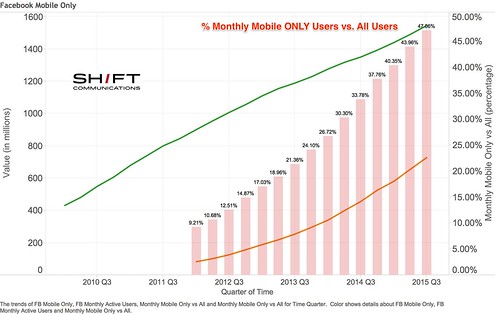 For half of Facebook’s users, your mobile marketing strategy is synonymous with your Facebook strategy.

In what is becoming an unsurprising story, Facebook also grew its revenue significantly; below, every region showed Q3 revenue growth from advertising: 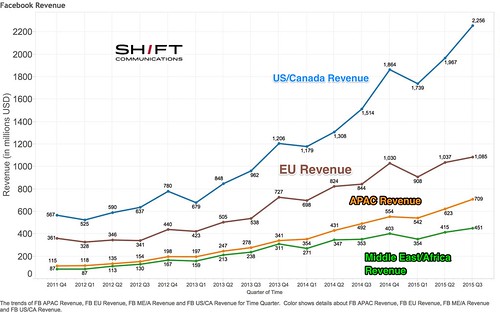 Above, what’s interesting is the very strong growth in the US and Canada, continuing a trend from the previous quarter. The only region that weakened was the EU.

Looking Forward: What Does This Mean

Facebook, stronger than ever, is not only the unquestioned leader in social networks, to some people, it’s the entire Internet. CEO Mark Zuckerberg reiterated that VR will be the firm’s focus in 2016 with the launch of its Oculus VR headset and technology in Q1; Samsung’s VR technology will integrate with Oculus by the 2015 holiday season. Concurrent with this technology release, Facebook continues to make significant investments in video integration in its news feed.

Have you tried shooting and loading 360 degree video on Facebook yet? If you haven’t, you’ve only got a few months left to find a vendor or develop the capability yourself if you want to be a first-mover in the technology on Facebook.

COO Sheryl Sandberg emphasized the importance of video ads on Facebook, from measuring them with brand lift and conversion lift technologies to integrating video ads with television and other media platforms. Have you deployed video ads on Facebook using its native ad interface, Power Editor, or Atlas and Liverail? If not, now’s a great time to try.

Video of all kinds is proving to be a higher than average barrier to entry for your fellow marketers. Find ways to leverage the creation and distribution of video in paid, earned, and owned Facebook channels to maximize your potential for success.