State of Facebook: 1 in 4 users is mobile only, brands will pay more

Facebook recently released its Q4 and 2013 annual report detailing the state of the largest social network. How are things in the nation of Facebook? For one, it’s now almost the second largest country in the world, just behind India. Expect Facebook to surpass India early in 2014. Let’s look at some of the raw numbers in our ongoing State of Facebook series. 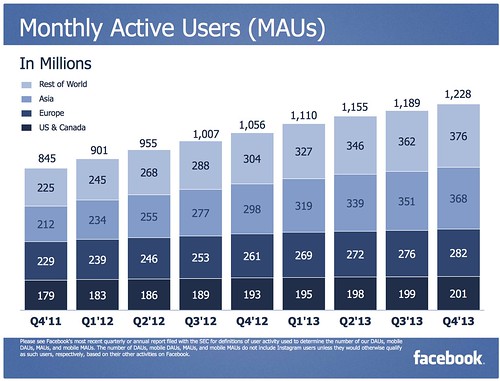 In terms of actual growth rates, Facebook’s rate of growth has been slowing. This should come as no surprise, since they’re reaching a significant amount of the planet. How much? According to the ITU, the number of human beings with Internet access of any kind reached 2.784 billion in 2014. That means that Facebook reaches 44% of the Internet-accessible human beings on the planet. 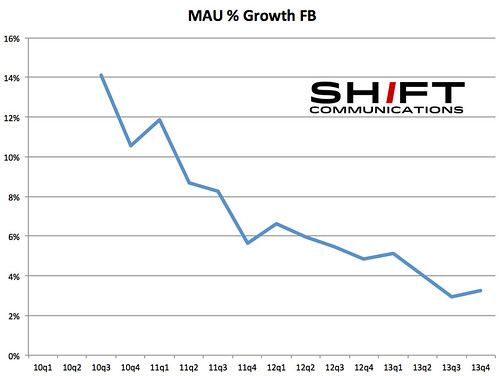 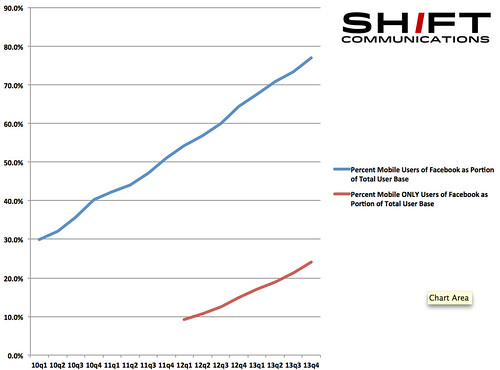 Think about all of the ads you’re probably running on Facebook, all the content you’re posting, all the lead generation efforts you’ve got going. If your conversion efforts are not mobile-friendly, you are effectively throwing away 25% of your Facebook marketing dollars completely, and making it unpleasant for 3 out of 4 potential customers.

Speaking of advertising, let’s see the numbers there: 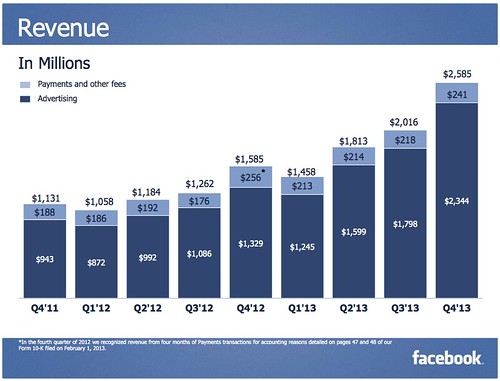 Facebook’s doing quite well with advertising revenue, wouldn’t you say? In just Q4, ad revenue spiked by a whopping 30%: 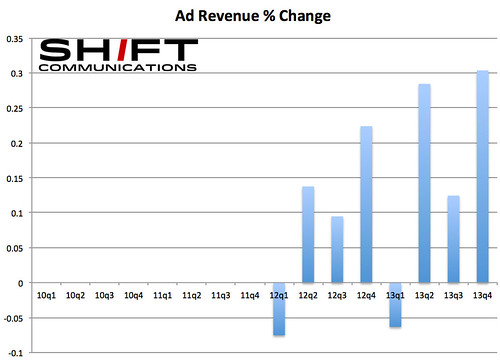 Here’s the real gem. Look back through your history to see when major newsfeed algorithm changes occurred:

While it’s not necessarily a correlation, there’s a lot to be said for making brands pay more even just to have their organic Page posts seen – and that explains why Facebook has clocked double digit increases in advertising revenue for most of 2013. What that means for us marketing and PR professionals is that the numbers support what Facebook is doing with its Newsfeed algorithms, which means we can expect further algorithm updates that transform Facebook into almost purely a pay-to-play for companies looking to get eyeballs.

With these latest updates, we can safely offer this guidance universally to all marketers and PR professionals engaging in social media:

The bottom line: Facebook is not optional for anyone in PR or marketing doing a social media campaign. End of discussion.

What’s next? Mobile is the trend, obviously. Ad revenue is the trend, and the biggest revenue jump is coming from ads. Shareholders and investors will want to see more double digit growth in ads, so Facebook will continue to tighten the screws on brands. That means pay to play is the trend. Every PR and marketing social media campaign should include paid Facebook ads alongside organic content, because owned media on Facebook is suffering from a downward trend and is only going to get worse.