Numbers Matter: Measure What You Manage in Social Media

Gary Vaynerchuk wrote recently that numbers don’t matter, only influence does, a way of attempting to explain quality over quantity. The idea that we should focus our efforts on high-quality interaction with our audiences isn’t new, but Gary’s wording of this idea is problematic.

Why? After all, it’s hard to argue with quality over quantity, isn’t it? Yes and no. Quality and influencer are, by definition, qualitative matters. How much does Gary influence me? If we were to ask him, he would probably have some sense, but it is unlikely to match what I would say about him. We cannot, despite the latest advances in technology, measure inside peoples’ heads, so we cannot say for certain how much influence a person has over someone else.

The best approximation we can currently achieve is to ask people their perceptions of us. Qualitative perceptions are difficult and expensive to measure. They can be measured, and superior research firms like our friends at Edison Research do just that – but at considerable effort and investment.

Numbers in abstract, like the number of comments an Instagram photo received, aren’t necessarily helpful by themselves, but the story they tell as part of a bigger picture does matter a great deal. The old business adage applies even in social media: we cannot manage what we do not measure. In the absence of rigorous, frequent surveying of our audience, we must look to the numbers.

The standard template for a social media funnel looks something like this: 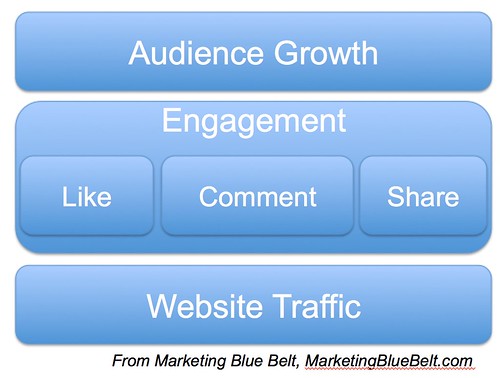 Consider the numbers around Gary’s post on this topic. At the audience layer, Gary has 1.24 million followers on Twitter. By definition, he has influence; 1.24 million people liking anything is influential to at least some degree.

At the engagement layer, Gary’s post garnered 255 Likes and about 15 comments back.

At the action layer, 134 people re-shared it and 116 people clicked through to his website to read it.

These numbers begin to tell a story when we put them together. Gary reaches 0.02% of his audience, but of those he reaches, 92.59% of them take a meaningful action. That’s an incredible second number; the first number, less so.

We can see how his action-based engagement numbers have colored his perception of what matters in social media. Put another way, in his post he says width of engagement doesn’t matter, but depth does. By traversing the social media funnel, we see that he has very narrow width but solid depth. His advice about choosing depth over width is wrong: choose depth AND width. Get the most out of the audience you’ve worked so hard to build.

His next steps shouldn’t necessarily be to capture the remaining 7.41% of his engaged audience to compel them to action, but to improve the 0.02% of his audience that chooses to engage by using rigorous, scientific testing. If he changes his width while preserving his depth, he’ll have a dynamite social media program.

Numbers do matter, but the story they tell matters even more. What story do your numbers tell?

The Power of Human Interaction
Content Marketers: Stop Doing 70% of What You’re Doing