How Much Impact Has Facebook’s Newsfeed Changes Had?

Much ado was made during the month of January about Facebook’s Newsfeed changes. Social media experts proclaimed that everything was fine; business press declared the era of social media over. What actually happened, and how measurable has the impact been?

To examine the changes, we looked at the Facebook engagement rates of 3,265 Facebook Pages with more than 1,000 followers in four categories:

Due to limitations in the API and what data is publicly available, we cannot disambiguate paid and unpaid posts.

When we examine the overall impact of Facebook’s algorithm changes, we see a distinct decline in engagement with content since the January 11 announcement, denoted by the red line: 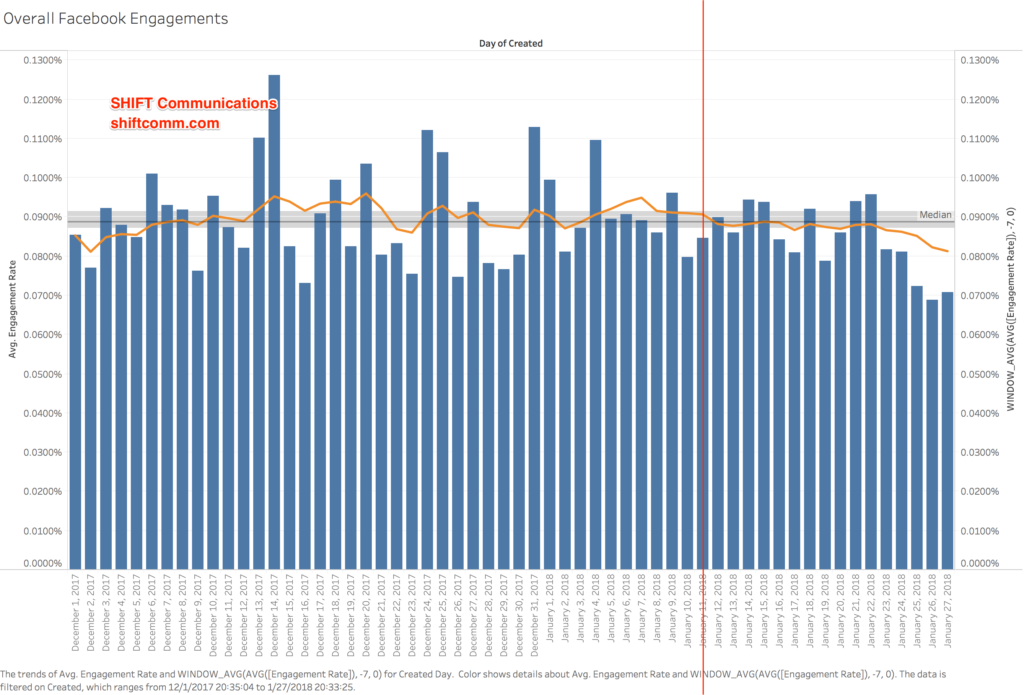 Engagement has been below the historical median every day since January 11, showing a clear decline of approximately 11% from January 11 to January 27 in the 7-day moving average (the orange line).

Let’s look at a category reputed to be hit the hardest, publishers of news. In this category are publishers such as the New York Times, MSNBC, BuzzFeed, Mashable, and other similar-size publications. 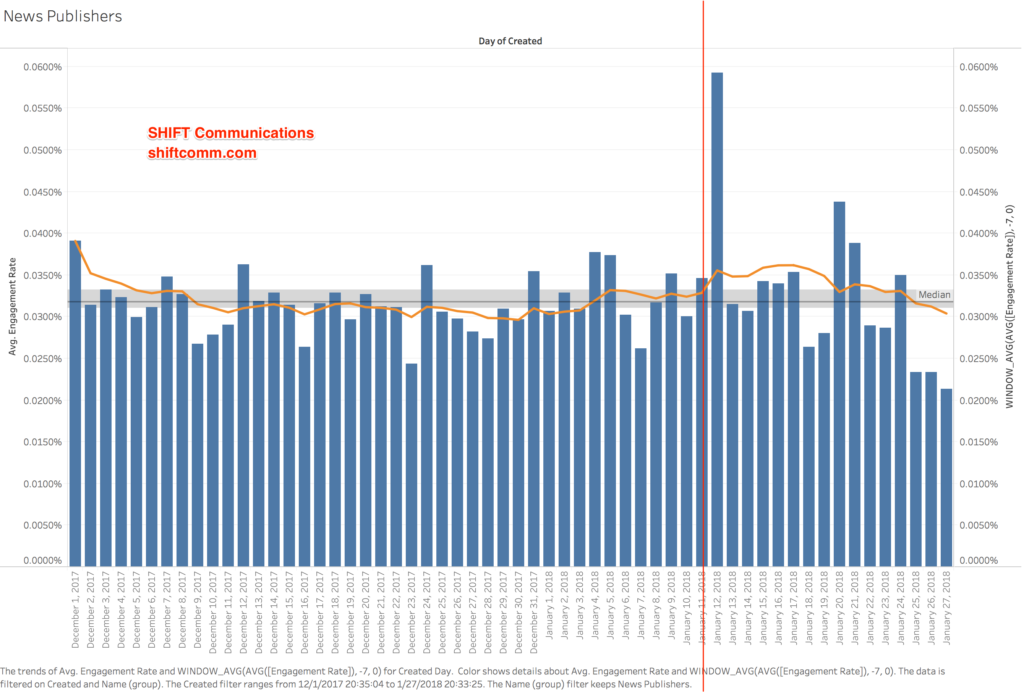 In contrast to all pages, we do see a decline in the same time period, but the decline is not as severe; in the window of data, publishers’ average 7-day engagement rates are not below the historical lows prior to the algorithm change. While publishers may have compensated with additional budget, the net impact is nominal thus far. We do see in the blue bar graphs that the last 3 days have displayed lower than average engagements. It’s too soon to tell whether that’s an anomaly or a new normal. 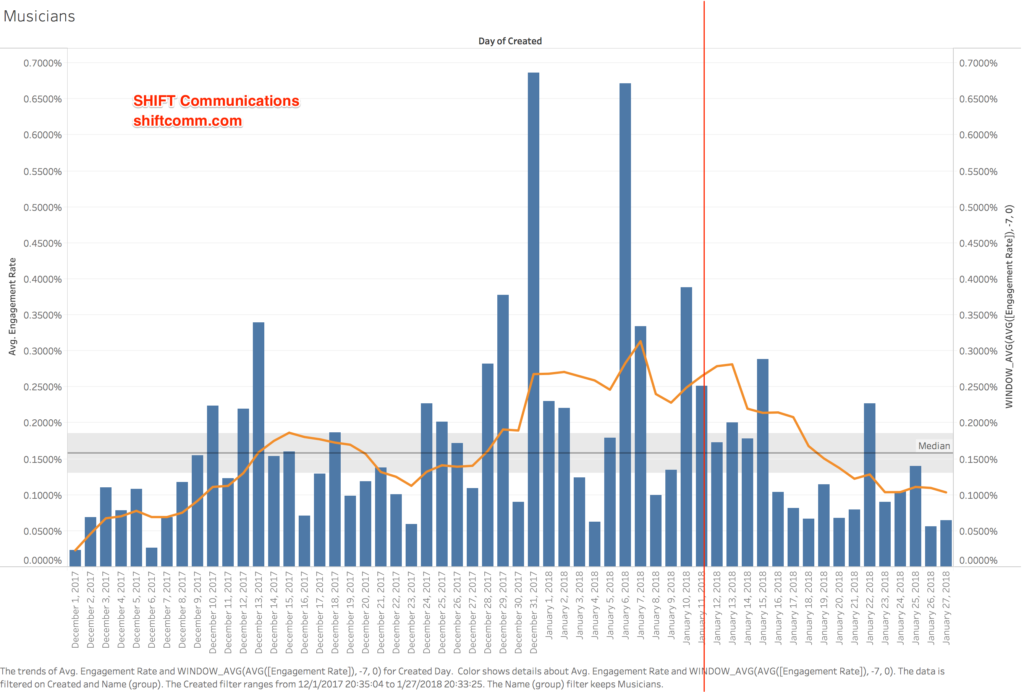 We see a clear and precipitous decline in engagements since December 1; however, the decline is not below historical norms for this time period. It remains to be seen whether public personalities will remain at such lows, since much of their audience is consumer-driven and the holiday period is when consumers would naturally engage more with them. 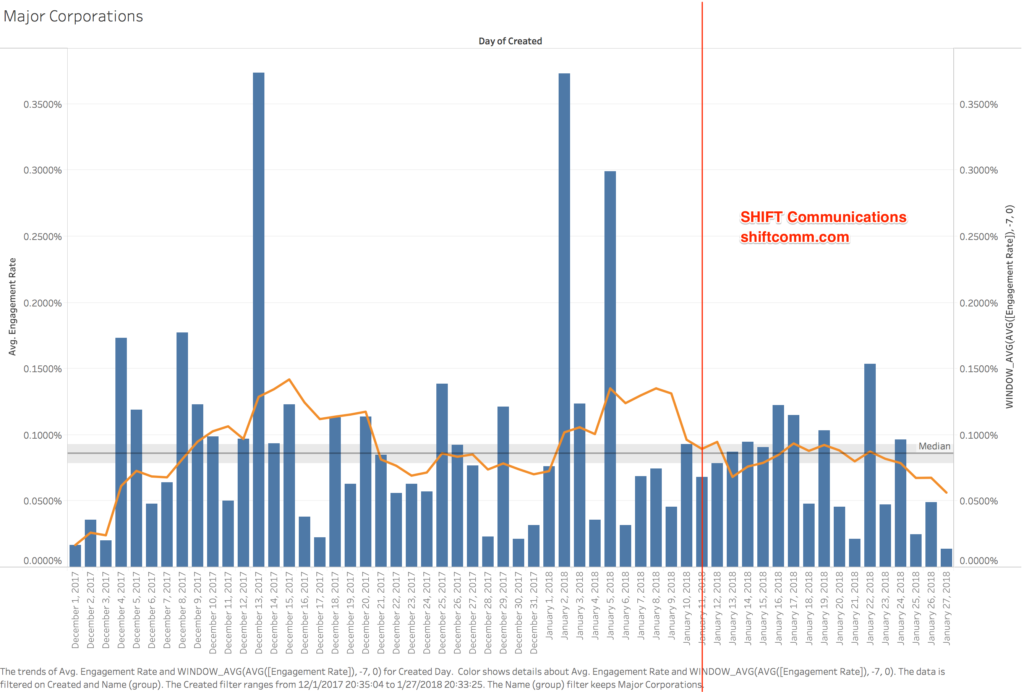 Above, we see clear declines in major corporation pages, but the trend here is as questionable as musicians and public personalities; in the beginning of December, engagement was lower.

The reality is that Facebook engagement overall appears to be down approximately 11%, but groups and individual Page performance varied significantly. The algorithm change hasn’t had more of a dramatic impact because, to be blunt, most Facebook Pages had terrible engagement to begin with.

Let’s put these numbers in context:

Especially for news publishers, if they have a headquarters in a major metropolitan city, they would create more engagement with their content by accosting wandering pedestrians outside the front door than they are currently achieving with Facebook’s algorithm. Publishers and corporations should do some serious cost-benefit analysis to determine whether Facebook as a content publication platform is worth their time compared to other marketing opportunities.