How to find insights into your PR metrics

Interpreting metrics and deriving insight from them is one of the most difficult jobs of any PR professional. Very often, we find ourselves in the position of having tons of data, lots of statistics, but not enough tools in the toolbox for explaining what the data means or be able to explain it in a language that our stakeholders find useful. Today, let’s look at a framework to help you get more out of your data.

In order to make sense of any metric, you need to understand three things about it: position, change, and rate of change. If you were to look at any journey you were taking to achieve a goal, there’s a starting point, an ending point, and your position along that journey. When you’re looking at metrics data, there’s a starting point, a goal you’re trying to hit with that metric, and how far to that goal you are. If, for example, you had a goal of 10,000 Twitter followers by the end of the year and today you have 100, you understand your position with regard to your goal. You know you’re not there yet, but that’s about all you know – the metric of position tells you how close you are to your goals. 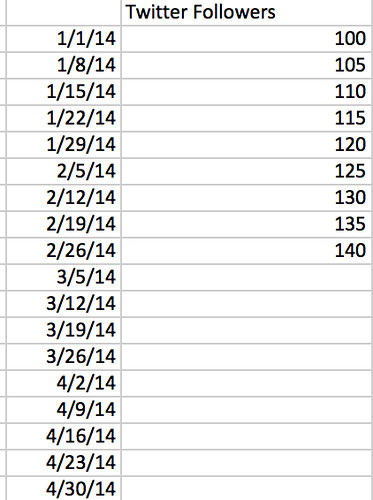 The second level of understanding you can gain is change. Since the last time you looked at the metric, what has changed? Change is important because it can give you a sense of when you might reach your goal. In any given PR or marketing metric, change tells you the likelihood of reaching your goal by a certain time. Your goal of 10,000 Twitter followers by year end will be reached if you’re adding 50 followers a day and it’s still May. If you’re adding 5 followers a day and you keep doing what you’ve been doing, you’re not going to hit your goal. The derivative metric of change tells you how fast you’re currently going towards your goals. 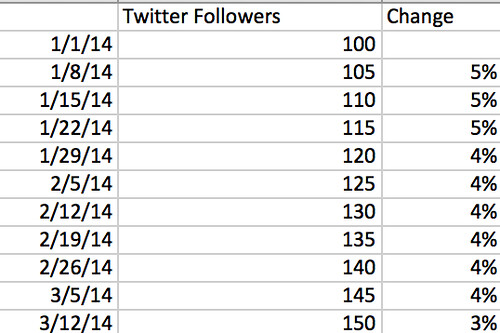 Where rate of change becomes truly useful is understanding whether a change you make to your program is having lasting effects or gave you just a one-time boost that faded away. Here’s an example: let’s say you spoke at a conference and from that talk, you got an extra 100 followers. Did that give you a long term lift, or was it a one-time shot? 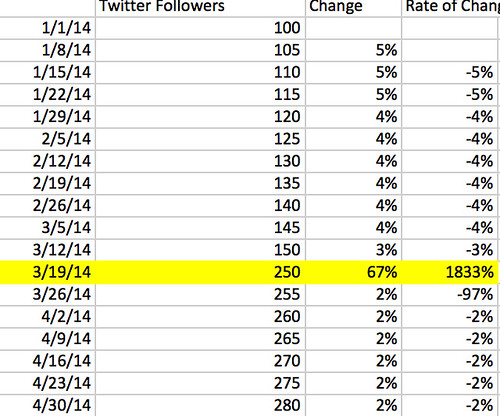 The answer was, it was a one-time shot that produced no lasting effects on your ability to get followers. Now suppose that you created a new mobile app for your brand that engaged people using Twitter, and it affected your Twitter follower growth like this: 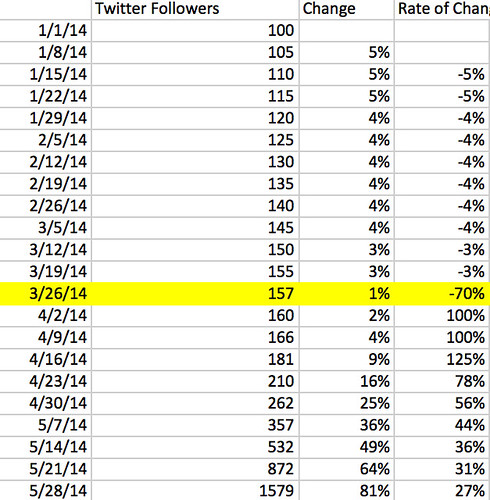 Is the app working? Will you hit your goal of 10,000 followers by the end of the year? Absolutely, because the rate of change is positive and sustained over a period of time. It’s not a one-time shot; it’s steady growth. Any time the rate of change is consistently above zero in any metric, you are on a growth path. Whatever you’re doing, you should keep doing; and if resources permit, you should do more of it.

With this framework, you should be able to examine any metrics and see not just what happened, but what it means for your future growth. Try it out – all you need is your data and a spreadsheet to do some basic calculations.