What’s the impact of fake news? Is it as big a problem as people make it out to be?

Shortly after the 2016 US Presidential election, America’s interest in “fake news” skyrocketed; some believed that fake news sites heavily influenced the outcome of the election. How concerned were people?

We saw search volumes spike during the week of the election, per Google Trends:

We saw the number of news stories dedicated to it increase significantly, as found in the Google News database: 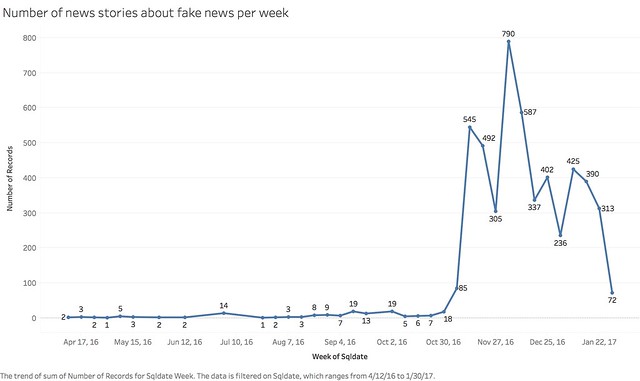 We saw many conversations on blogs and forums also increase sharply:

People are deeply concerned about fake news, and the news media has given us no shortage of coverage about it. However, the real impact of fake news goes beyond its existence. How do people react to it? What makes it so potent? We examined thousands of news stories from 2016, from fake sites and credible news outlets to benchmark the impact of fake news on our behaviors with machine learning technology. Here’s what we found:

Fake news conditions people to be less discerning about the news they consume, and make judgements based solely on misleading or false snippets of news.

The True Danger of Fake News

However, mislead readers is not the sole danger of fake news. The true danger is in how our machines learn what is real and what isn’t.

In the field of machine learning (part of artificial intelligence), we train our machines from libraries of already-classified data. Imagine showing a toddler an apple repeatedly until they say the word “apple”, indicating they’ve learned to associate the word and the fruit. Our machines do the same.

Now, suppose the training library is corrupted, with a huge mass of fake news that appears to be legitimate based on the human behaviors taken around it, such as social media sharing and inbound links to the stories. In the example above, suppose we show the toddler an apple only 1 time out of 10, but show it a pickle the other 9 times. Which will they call an apple?

This is the very real danger of fake news. Our machines serve up our news, our social media feeds, our email marketing, our stock tickers – every bit of data we consume on a daily basis. If they see fake news as more legitimate than real news because of disproportionate sharing, they will serve it up to us instead. Not only will we fail to discern real from fake, our machines will tell us fake is real, until it becomes real in a self-fulfilling prophecy.

Our work as public relations professionals is existentially threatened by fake news. Our brands, our clients might find themselves under assault by a news story which has no basis in truth. As the adage goes, a lie races around the world in the time it takes the truth to put its shoes on.

What do we do about it? We need to devote a portion of our time and effort helping promote real news. As consumers, we must support the legitimate news outlets we want to see thrive. As PR professionals, we must shed the label of “spin doctors” by being ruthlessly honest with ourselves, our stakeholders, and our clients.

Just as the antidote to darkness isn’t more darkness, but light, the antidote to falsehood is truth. We as professional communicators must be unyielding in our service to the truth on behalf of our clients. The only way fake news diminishes is if we each do our part to eliminate the false in our work.