3 places to surf ahead of the news

For centuries, humans have been riding waves as a form of transportation, from ancient Polynesian cultures onward. Surfers swim out into turbulent waters and find a wave to match speeds with. The basic idea then is to be just ahead of the break, riding the wave to the shore. A similar phenomenon can occur in marketing and public relations, where a savvy marketer or PR team can find a story and get just ahead of it in order to ride its power. (noted author David Meerman Scott calls this phenomenon “newsjacking”, which is a neologism for hijacking the news.)

But how do you actually make this work? How do you get ahead of the wave of news so you can surf it? After all, in actual surfing, the least exciting place to be is behind the wave. There are three starting places to look for waves to catch. The first and most obvious are near-realtime social media channels. If you haven’t already set up Twitter lists, Facebook subscriptions, and Google+ circles of prominent, influential, or interesting people in your industry, stop and do so now. Watch what they chat about collectively and look for trends, hashtags, and commonly shared items to see what’s gaining ground and attention among your industry leaders. These will also be the most relevant waves to catch, as they’ll be focused on your industry. 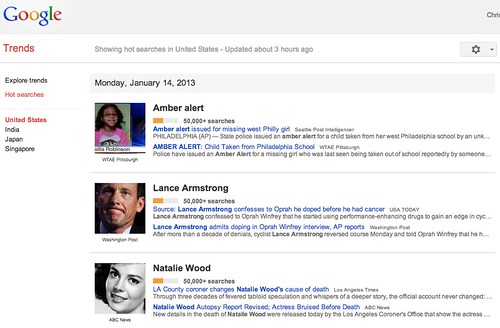 The second place to look are on two of Google’s properties, Google News and Google Hot Searches (part of trends). Google’s Hot Trends will give you national stories that are breaking based on the number of searches about them, which means that a story is still in a discovery phase. People are searching for more information. Google News can deliver targeted information about your industry as spotted in registered news sources.

The third place to look is your calendar. What events that are known to generate buzz are coming up? Recently we had the Golden Globes awards, and that’s followed by the Academy Awards about a month later. If you’re in media, fashion, or entertainment, planning ahead with content should be a no-brainer since these events are known and scheduled. If you’re in B2B SaaS services, you’d better know when Oracle OpenWorld, Salesforce Dreamforce, Enterprise 2.0, and other events are, and have content ready to roll around those events.

In the next piece, we’ll talk about what news you should and shouldn’t surf.